While I am staying with one of my littlest buddies, Eli, one of my favourite things to do with him is watch ‘Super Why!’ in the mornings. Sometimes, Chrissy will even shoot me an instant message reminder that it is on at 9 am. (Or 8 am on weekends which I didn’t know until I missed it).

Ripped right off of the website, ‘Super Why!’ is the animated television series and interactive website that helps children ages 3-6 learn key reading skills, including alphabet, rhyming, spelling, etc. (which makes Eli a rockstar already since he’s not even two and Kalli is only a few months). It also makes me feel like a total dork but I digress.

The premise is actually really cool and brings out the teacher-nerd in me:

The title character introduces himself as “Whyatt”, and welcomes the viewers to “Storybook Village”, a place where all fairy-tale characters reside. Then Whyatt hears a ringtone from his “Super Duper Computer”, which resembles a small red PDA. He answers the call and discovers that one of the other characters has a “Super Big Problem”. After investigating the nature of the problem, Whyatt summons the “Super Readers”, sending out the call: “Calling all Super Readers! To the Book Club!” The four characters, Whyatt, Pig, Red Riding Hood, and Princess Pea, then appear in front of the aforementioned Book Club, which is a building made of books. Whyatt then tells the viewer to “say YOUR name”, including them among the Super Readers.

The goal of the Super Readers is to follow the storyline to solve the problem. As they progress through the events of the story, they encounter obstacles, which can be solved by applying their literacy skills to change the story (for instance, changing the prince in “The Frog Prince” back into a frog because the princess liked him better that way). As they overcome these obstacles, they are rewarded with red glittery “Super Letters”. These Super Letters are then uploaded into the Super Duper Computer, eventually forming the word(s) that make up the solution to the Super Big Problem. The audience members are encouraged to look for Super Letters throughout the story, and to identify them when they appear.

Anyway, the show also fascinates me because I am a slight fan of ‘Wheel of Fortune’ and ‘Jeopardy!’ so I like to try to solve the puzzles before they find all of the ‘Super Letters’. I think I like it more than Eli does. 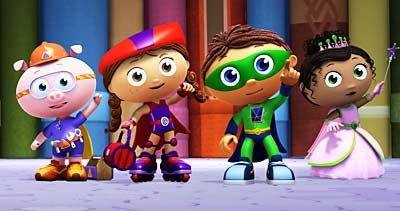 If I consider this similar to the FBI Behavioural Analysis Unit from ‘Criminal Minds’, somehow it gets more interesting — although, rather than solving murders and weird crimes involving clowns, the Super Readers hang out in STORYBOOK VILLAGE and solve SUPER BIG PROBLEMS using their literacy skills and a SUPER DUPER COMPUTER and saying things like ‘PRESTO!’. Really.

No, I don’t water down my coffee with Bailey’s for this ritual…I actually think it’s sweet. Some of their BIG problems have been:

1. How do we get a cat unstuck from a tree?
2. How do we get Whyatt’s baby sister to stop crying?
3. What should Red have done instead of just taking Peter’s pickled peppers?

Relation and relevancy to my own life? I am crafting an e-mail to PBS to see if they can sequester the Super Readers solve this SUPER BIG PROBLEM with their varying skills:

How can Kate get a teaching job? Or any job?

Yes. If you find the glittery red Super Letters to solve that puzzle, please… help me out.

Otherwise, I am destined to mornings watching Super Why! with Eli. Forever.