I have a Rockband hangover. Last night a few of us had a chill-ax appy and happy hour get together. It was fun to do that but what was more fun was playing Rockband for the first time. I have zero hand coordination/multi tasking capabilities in that type of competitive atmosphere. Ergo, I cannot push the buttons on the guitar with one hand while strumming with the other while trying to follow the notes on the TV. So I tried drumming, which was equally as difficult because you have to hit the appropriately coloured drum  while pushing a pedal while reading the notes. Singing was hilarious, not when I was going necessarily because I just suck, but when people like Luke sang, because he A. can actually be able to sing and B. get right into it with no reservation whatsoever.

That game is out of control. Our ‘band’ almost mastered Brad Paisley’s ‘Mud on the Tires’, The Who’s Teenage Wasteland’, and Pearl Jam’s ‘Alive’ but we really struggled through old school ACDC (you really wish you heard how high  Georg and Luke tried to get their voices for some of those) and the Dixie Chicks. I’ve only ever played Guitar Hero but Rockband is the best because while I was drumming away, not to a particular beat whatsoever, everyone else is entranced by their own instruments that I barely got any flack for my own performance.

Basically we played Rockband from 7 pm – 12:30 am. And I sucked. So even though my bandmates were totally supportive of my feeble attempts, I preferred being a groupie.

Here are some pictures. The problem with being behind the camera is that there is never evidence that I was there, which I totally was, laughing hysterically. And the pic of the spring rolls is for Jes; ignore Luke’s arm — he was fired up. 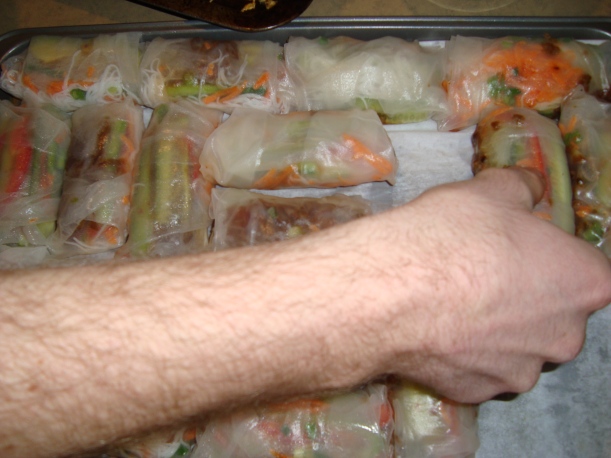 This one is my favourite because they are concentrating so hard. I think there was a moment where they felt to be real musicians. 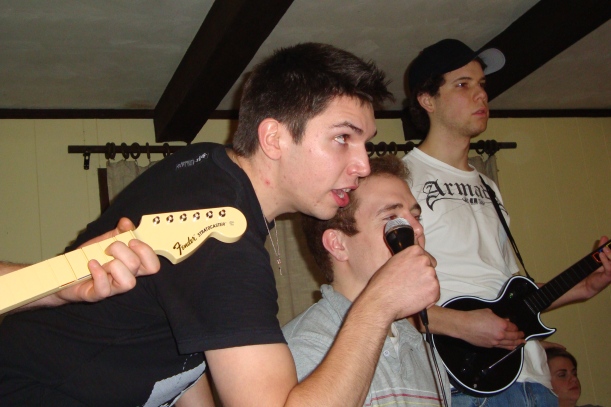 On another note, I am desperately seeking tickets for Bryan Adams… he’s putting on a show a week today. Anybody have two they want to get rid of? I like asking people what top 5 bands they would like to see live and ironically, Luke and I just had that conversation a couple weeks ago and B.A. is on my list. So we’re trying to go. Only problem is then I have to go see the bands on his top five list and I don’t really like many of them.